Everything you (probably) already know about New Year’s resolutions

Everything you (probably) already know about New Year’s resolutions

It’s that time of the year again. While we were all busy doing something not necessarily on our resolution list from this year, this year is already done and it’s time to start over again. And I see you think with a smile: thank God! 🙂

In general, people are more open to talk about new projects and goals—and about the opportunity to improve their lives—right now, every year between the end of December and the beginning of January. This is the time of the year when the resolution season is reaching its peak, as we approach the New Year. I cannot miss this opportunity to grab your attention!

1. What is a New Year’s resolution?

The Merriam-Webster dictionary provides this definition:

“A New Year’s resolution is a promise to do something differently in the New Year.”

Wikipedia—my go-to digital source every time I want to learn something new—offers this definition:

“A New Year’s resolution is a tradition in which a person resolves to change an undesired trait or behavior, to accomplish a personal goal or otherwise improve their life.”

Wikipedia mentions a tradition, which sparked my curiosity. 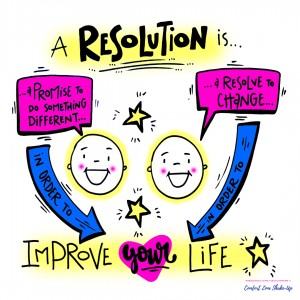 2. What is the origin of New Year’s resolutions?

“The custom of making New Year’s resolutions has been around for thousands of years, but it hasn’t always looked the way it does today.”

To make a long story short, the first people who made New Year’s resolutions—4,000 years ago—were the ancient Babylonians. In ancient Rome (yes, in Italy!!!) in circa 46 B.C., Julius Caesar established January 1 as the beginning of the New Year. Christians, Methodists, Protestants, and others contributed to the evolution of the concept.

I also found this curious: according to wonderopolis.org,

What about today? Again, according to history.com:

“…New Year’s resolutions today are a mostly secular practice. Instead of making promises to the gods, most people make resolutions only to themselves, and focus purely on self-improvement (which may explain why such resolutions seem so hard to follow through on).” 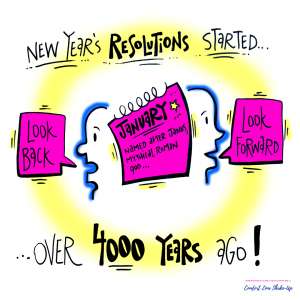 3. Why do we make New Year’s resolutions?

Resolutions can come in many forms, but the reasons we make resolutions fall into two important buckets. There are:

The bottom line is the same—we want to improve our lives—but the distinction between the two sets of motivations is crucial. Are we running away from something OR are we running toward something? These mindsets are totally different, and which approach you take will dictate the type of effort and priorities you need to put in place to achieve your goals.

Knowing what motivates us is crucial. 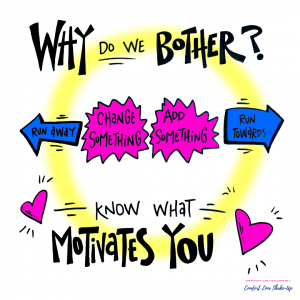 4. What are the benefits of making New Year’s resolutions?

New Year’s resolutions can motivate us—or can keep us motivated—to take action and to take control of our lives. We are the ones in charge of our lives. We have the power to change them. It is great to acknowledge that. When this is happening, we can experience a great sense of achievement that fuels additional motivation and the will to keep going. When this mechanism is working, our confidence level will skyrocket, as will our self-esteem. 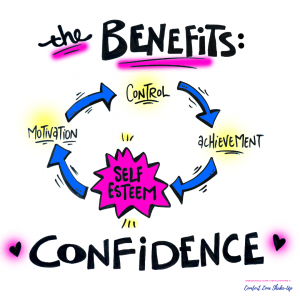 5. The science of New Year’s resolutions and willpower

PhD Psychologist Lynn Bufka, in her article “Making Your New Year’s Resolution Stick,” published on the website of the American Psychological Association, says that “setting small, attainable goals throughout the year, instead of a singular, overwhelming goal on January 1 can help you reach whatever it is you strive for.”

In an article published by Forbes, I learned that there is an emerging body of research led by Stanford University psychologists on willpower and its malleability. The researchers found that people “performed better or worse [on tests] depending on their belief in the durability of willpower.”

This is totally in line with what I believe, that the way we speak to ourselves matters. I’ve written about this topic in relation to having a positive attitude.

What I found in the Forbes article reinforces the message for both New Year’s resolutions and, of course, for the overall Comfort Zone Shake-Up:

“You have as much willpower as you think you have, essentially. Which means that on some level, your journey toward self-improvement will be a self-fulfilling prophecy.” 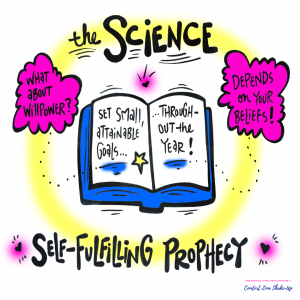 “According to U.S. News, approximately 80% of resolutions fail by the second week of February.” —Business Insider

This is the top line of my research. If you are curious to learn more, I recommend the following articles from YouGov, and Forbes. 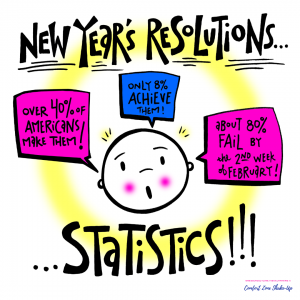 7. Why people fail to keep their New Year’s resolutions

Among the reported 92% of people who fail to keep their New Year’s resolutions, there are many different reasons. I found a quote that I believe summarizes very well why people fail:

“Shooting for the moon can be so psychologically daunting, you end up failing to launch in the first place.” —Forbes

Even if you launch your plan on January 1st, there’s a good chance that you will fail if you are among the large number of people who are:

The New York Times reports that resolutions often fail because they are not the right resolutions. Most of the time, a resolution is created based on what someone else (our society) is telling us. The goal is too vague and there isn’t a realistic plan in place for achieving it.

If the list of excuses can be extended, one question remains: What is the secret of the 8% of people who succeed? 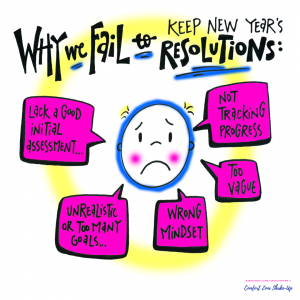 As you probably know, I support the idea of expanding our Comfort Zones instead of jumping out of them. I cannot resist making the parallel between the pitfalls of New Year’s resolutions and the traditional way our society talks about the Comfort Zone.

Shooting for the moon, having unrealistic (and sometimes competing) goals is like jumping outside—and too far—from your Comfort Zone. The idea is fascinating, but the reality is that only 8% of the people succeed, and we should do much better.

If we want to be part of the 8% of people who succeed in keeping their New Year’s resolutions—or even more than that, if we want to improve our lives—we should start small and from ourselves.

The mechanism is the same and as I already mentioned, you can start with an ordinary New Year’s resolution and you can end up changing your life!

New Year’s resolutions can be seen as good practice to shake up our Comfort Zones. For both, we should have a more of an organic process made of micro-steps and small accomplishments.

This time, in thinking about your New Year’s resolutions:

It’s time to shake things up and make a New Year’s resolution plan that sticks. After all, you want a WOW (life). Don’t you? 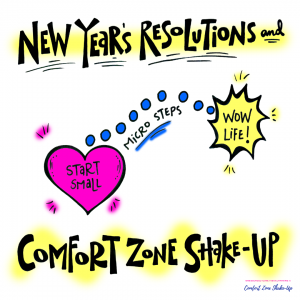